Mason rushed outside, grabbed his brother’s arm and screamed for help as he kept Nicholas’ head above water.

“Thanks to the quick action of Mason, his brother made a quick recovery, and is doing well!”

Firefighters had given Mason a firefighter uniform to wear for the presentation, held at the Placentia Fire Station.

“Today we were honored to present Mason with the Placentia Home Town Hero Award and make him a honorary Firefighter/Paramedic,” the Placentia Fire Department said Friday.

It was a terrifying incident for the family.

“My wife told me right now that my son fell in the pool and he wasn’t breathing, that he’s crying right now, but that is face is purple and he’s — she can’t talk right now I’m on my way to them,” the children’s father, Jose Ochoa, told the 911 dispatcher, NBC 4 Los Angeles reported.

There’s a fence around the pool but it was taken down for an open house. 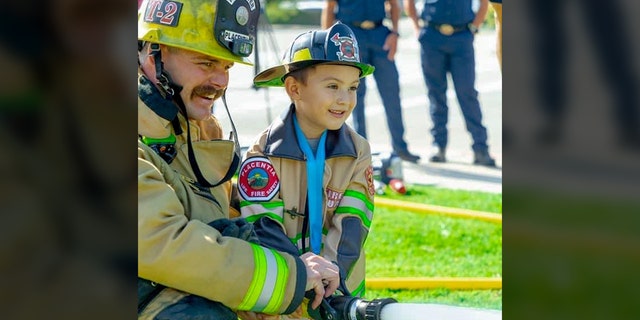 “I Will Kick Your Ass Out of Here!” – Detroit GOP Poll Challenger Threatened with Violence After Offering to Check 35,000 Ballot Dump in Middle of Night at TCF Center (VIDEO)